Rationale: The main purpose of providing water systems is to help people gain access to safe drinking water supplies they will use to improve their health and well-being. The water must be safe, but also pleasant enough to encourage beneficiaries to drink it.

Target 1: Water should be free of pathogenic bacteria (2 Points)

This operational target is perhaps the most obvious of any target. Unsafe water sources like shallow open wells, stagnant streams and swamps need to be replaced by safe drinking water supplies. Water from new drilled wells should not cause people to get sick.

There are literally thousands of water quality tests. But testing for all substances would cost tens of thousands of dollars and require high quality laboratories that are not locally available.

Many serious diseases, such as typhoid fever and dysentery, can be traced directly to harmful micro-organisms in polluted water. To determine if they are present, Lifewater uses a Pathoscreen field test.

This test is simple to perform, requires incubation at tropical room temperatures, and requires sample observation for 3 days to detect the presence of any dramatic changes which indicate that hydrogen sulfide-producing bacteria are present. These bacteria are usually associated with the presence of fecal contamination and are used as indicator organisms.

In 1995, Lifewater was asked by the European Union and the Liberian government to conduct the first systematic testing of 150 communal wells in the capital city of Monrovia. Lifewater found that nearly every well had active bacterial populations, with half showing the presence of coliform and/or pathogenic bacteria.

When we presented these alarming findings to village chiefs and government leaders, to our disappointment, they responded with ambivalence and a lack of concern. Most saw no problem with people continuing to drink from unsafe wells, and/or with disinfecting wells with woefully inadequate quantities of chlorine.

Meanwhile, for entirely different reasons, tension was developing between two Lifewater volunteers. They were sharing a room and starting to accuse each other of stinky socks and poor hygiene. Then one of them opened the closet door and found the problem -- half a dozen forgotten bacterial water samples! 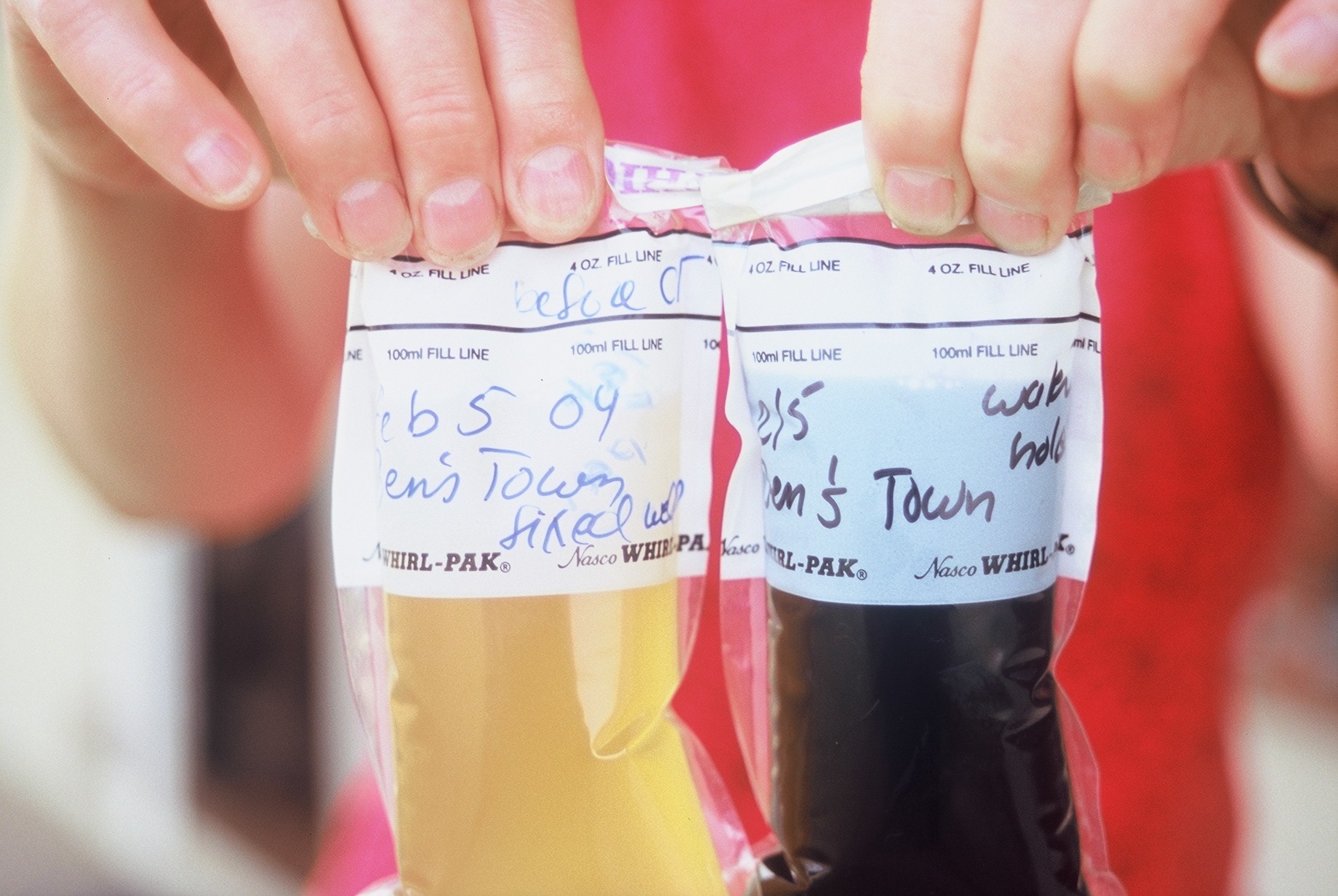 The stinky samples were from badly contaminated wells. What had been clear water had turned within 24 hours to black water. And thanks to hydrogen sulphide off-gassing, the water smelled terrible!

One of our volunteers trying to convince the village chiefs and government leaders that their wells were too hazardous for people to drink from them decided to set aside science and go with “show and tell.” He showed the chiefs, leaders, and villagers the discolored, smelly water samples.

Having uncontaminated and contaminated water samples side-by-side brought instant understanding. People stopped drinking from the wells and started asking what to do. As one person succinctly put it: “We cannot give that black death to our children!” Now there was widespread local support for properly disinfecting wells, rehabilitating dormant wells, and drilling new wells.

From this, we learned the importance of showing people contaminated water samples so they can see the “Black Death” colour and smell the “stinky sock” odour. It gets everyone's attention!

Drinking water must comply with Canadian Drinking Water Standards, having nitrate levels below 10 mg/litre and nitrate concentrations less than 1 mg/litre.

Simple colorimetric test strips can make a profound impression. In 1999, Lifewater volunteers were working in a community in Ghana. During the training workshop, the local well was tested. It was found to contain elevated levels of nitrate and nitrite -- clearly related to a latrine located right beside the well.

Facility leaders were shown the dark colours on the test strips. They asked what it meant and were told that the latrine was contaminating the well and that an infant drinking water from it could get sick to the point of death.

The workshop then resumed but communication was difficult due to loud, rhythmic pounding. During a break the volunteers went outside and found the source of the noise. The latrine was being torn down, even while the workshop was still in session! Education is indeed the power needed to mobilize people and bring about needed change!

Target 3: Water should be free of turbidity and objectional taste/odour (2 points)

Turbidity (particles suspended in the water) makes water look cloudy, and can cause a gritty feeling in our mouths when when we use the water to drink or cook. In addition, turbidity can create maintenance problems by rubbing moving pump parts like sandpaper, causing rapid pump failure that may require changing expensive below-ground components like the cylinder.

Turbidity may be a sign that a well was not properly built, and that below-ground formation caving or well screen placement adjacent to clay layers may cause the well to pump coloured water, sand and grit forever. However, sometimes mechanical surging and well development pumping can clear the turbidity and provide users with a viable source of safe drinking water.

Water may be safe, but for users to want to drink it, the water must be free of offensive odour and pronounced hardness or iron.

Although these are aesthetic factors that do not directly affect water safety, they make water unpleasant to use, driving users back to unsafe past sources that do not have these offending smells, taste, or appearance.

Application Story: Just because water is safe doesn't mean people will want it

In 1997, Lifewater wells along the Marshal highway in Liberia were audited and the water was found to contain noticeable concentrations of fine sand. The water was safe to drink but the sand made it unappealing. The sand also rubbed against the pump seals, causing premature pump failure.

In 1999, several wells in Liberia's Dwazon area were audited by volunteers and the pumps were found to be in great shape because they were not used. The well water had noticeable hydrogen sulphide odours. The water was safe but no one was interested in drinking water that smelled like rotten eggs!

Similarly, in 2004, Lifewater volunteers visited a cluster of wells in Kakata, Liberia. The water tested as safe to drink. But the villagers had reverted to using water from the stagnant swamp because the well water had high iron concentrations that gave it an oil-like sheen and made it bitter to drink.